You know, if I can only get in here twice a month I may just have to give it up. It may come to that but for today, I'm still in a chatty mood. As for the 11 day absence...

Morrigan spent last week at Middle School Madness camps: The History of Modern Warfare and Crazy Chemistry. Our friend Jerry pointed out that with choices like these, it seemed we were breeding a future terrorist. Seeing as the most dangerous thing she created was a marshmallow gun, I think we're safe. But she did have an absolute blast. It really gave us hope that she will enjoy the "indoor sports" in middle school like yearbook and debate. Lord knows those were the things at which I excelled. 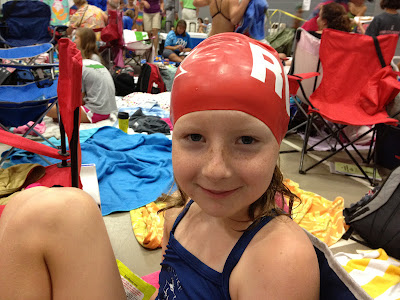 So the way these things are scored is thus: there are three time standards; gold, silver and bronze. For each category, the top 20 swimmers are awarded points. It is quite possible to swim the best race of your life and get a 21st place gold, which garners nary a point or ribbon, while 40 people slower than you can get both. As the weekend commenced, I realized that Maggie had times that put her in danger of doing that for each and every one of her races.

But in a good news/bad news kind of way, she was slower than her seed time in almost all her races, which garnered her not one, but two silver level medals and a pile of points. Rather than feel conflicted about the mixed message, I decided to just feel happy for her.

She said it was the best swim meet ever. Really, her favorite part was cheering for her bestie, Margaret. 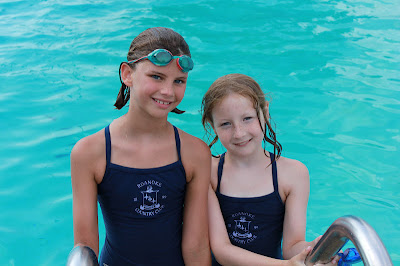 She delighted in taking her a towel after her races and after the dreaded 100 Free, a package of M&Ms. It just can't get much sweeter than that.

That afternoon there was no rest as we had to get packed for Harry Potter camp, which both the girls were attending the following day (and week.)

Drop off was seamless as they were both plenty ready to leave us for a week of geeky fun. 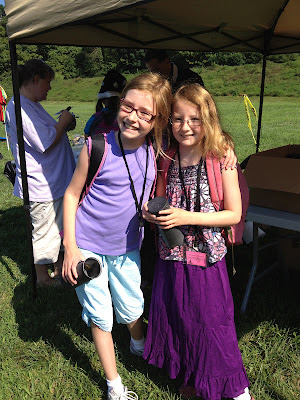 Oh I forgot the phone part! Morrigan has been begging for ages for a phone. We told her when  she saved up enough for the phone, was able to make the monthly payment ($10 for the extra line on our account,) and had a six month emergency fund ($60,) she could get a cell phone. She diligently saved her babysitting money and hit the mark last week. She is the proud owner of her own, slightly low end, cellphone. We switched, at the advice of the AT&T salesman to an unlimited text plan. It turned out to be an excellent idea considering that on the way home from the store, she texted Tim and me several times each to tell us how much she loved us.
Posted by Katie at 4:02 PM 2 comments:

We noticed Morrigan was squinting earlier this year and made her an appointment with the Opthamologist. It was several months out but since she was insisting that she would NEVER wear glasses, we didn't think there was a huge hurry.

Turns out she is -1.25 in one eye and -5.5 (!) in the other. And the worse eye has been wandering. The delivery of that kind of news makes you feel very, very bad about not going to the eye doc last year. So we are patching, fortunately only at home, and getting new glasses, which was an odyssey itself.

While we were checking out at the doc's, Tim let Morrigan go into the optical shop adjacent to the waiting room. She found a pair she loved but it was late in the day and I was not about to get them there and then have to drive all the way across town to Salem to pick them up. Surely Lenscrafters would hook us up.

So during swim team, we set out to the mall where Morrigan spent an hour trying on frames, sobbing, about how awful they were and how terrible she looked. Finally, we just ejected, seeing as nothing was going to get accomplished there.

It seemed only logical that the Vistar location near our house, part of the same group as the one in Salem, would have the same frames, right? Wrong. After pawning my other charges off on Fiona, we found out that no, they ordered independently for what suited their clients. And what didn't suit their clients near us were the coveted pink frames.

Morrigan mopingly said she would take the least offensive pair from Lenscrafters.

Well damn it all to hell anyway. We lit off for Salem.

[As an editorial note here, I would like to add how I most definitely did not lose my cool during this entire transaction though lord knows it would have been deserved.]

Twenty minutes later (that is all the way across town around here,) we arrived at our original starting point where Morrigan walked in, looked at the displays and said, "Hmm, I'm not sure which one it was I liked."

You've got to be mother fraking kidding me.

But just when it seemed I may indeed lose stuff entirely, we found a pair. 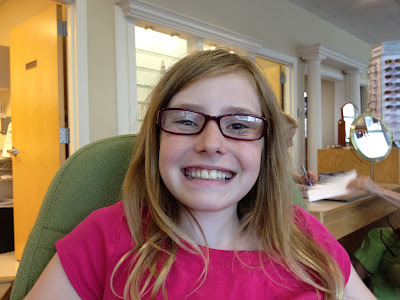 All smiles! In real life they are pinker than the picture.

Now I just have to drive all the way across town to pick them up next week.

We've been home for about a week and I am just now feeling caught up around here. We spent a week in Garden City Beach, South Carolina with Tim's family. Let me tell you, it flew by! While we were there, Nancy & Doug celebrated their 50th Anniversary and we celebrated our, significantly less impressive, 17th. 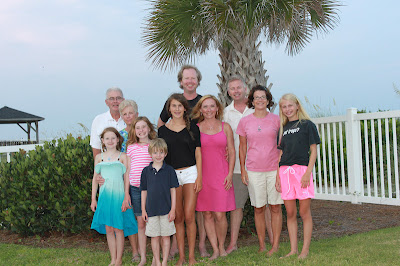 When we arrived, we were told our place was not ready. Seeing as we are that kind of people, we drove to it anyway and figured that didn't mean we couldn't start enjoying the pool. It was a smart move. Next year we just need to make sure we pack some cold beers for then too. 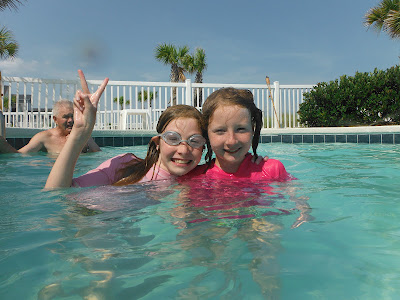 Eion was all about the hot tub. Everyone else kind of ignored it at first, thinking it was silly to go in hot water when it was 90 degrees out. But the E was persistent and wore us down until we let him go in. And then persisted until we joined him. 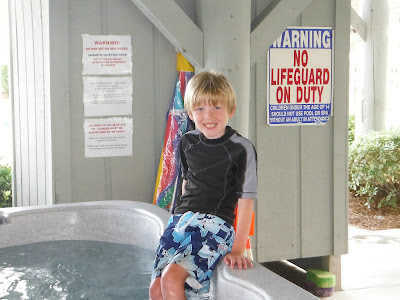 To tell you the truth, it was kind of nice. We all ended up spending a fair bit of time in there at the end of the day, all thanks to E. 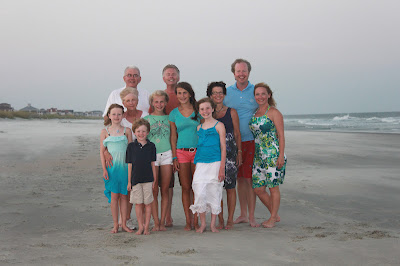 and then the foot races! 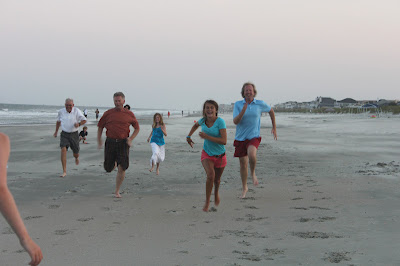 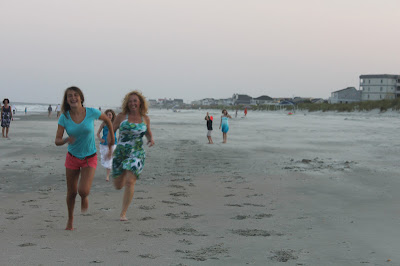 Had I not run in such a serpentine fashion,
I would have had her!

While it went by too fast, it was fun fun fun! So much so that everyone is signed on for next year already! 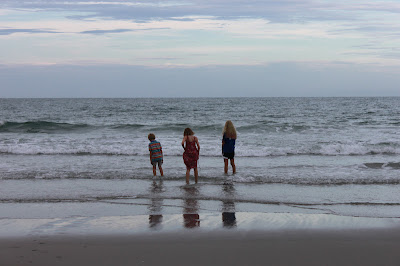 You may have heard about the storm, nay derecho, that hit a few weeks back, leaving seemingly the entirety of southwest Virginia powerless for, in some cases, up to nine days. 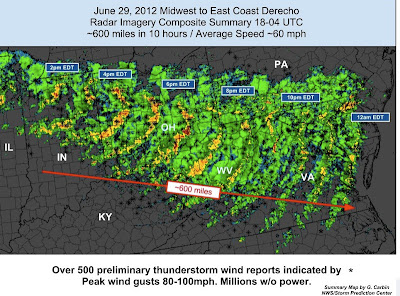 Friday night, the storm was blowing fiercely and the power was blinking. We went to bed armed with flashlights, sure we would soon have no electricity. But we awoke to a cool, air conditioned house. All the clocks were blinking but we had power.

Seeing as we are generally the first to lose power, we figured that if we had it, everyone must. Our internet was out so we couldn't be sure but set out in high spirits for the gym only to find our street resembled a complete war zone and our exit was blocked by a downed tree. 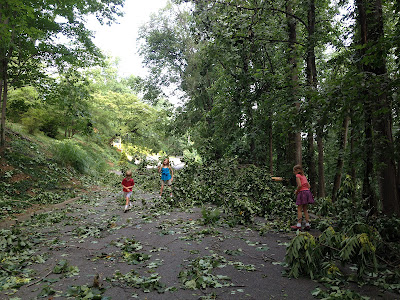 A few texts and we quickly discovered how widespread the damage and suffering (in the 100+ degree heat) was. We immediately recognized that we were living under a special star and set out to protect our status by putting some positive karma out there in the world. Ann, Hans and the boys didn't need to be asked twice and promptly moved in.

What ensued over the next few days was akin to a big sleepover. We had limited cell service and no internet so we were kind of closed off from the world. We watched movies, played Just Dance (3!,) cooked and at one point, had a full on sing along to Call Me Maybe and That's What Makes You Beautiful.

It was a blast.

The downside was the guilt. As SoRo sweltered, we were having a party with some of our best friends. We felt compelled to do more for the less fortunate, in this case, Casa Fraught. They were in Ohio as the contents of their chest freezer, including but not limited to a quarter cow, threatened to defrost. Tim and I moved as much as would fit in our basement freezer, praying that our good deeds would be enough to keep our power on. (They were.)

As the valley regained power, it was time for us to go to the beach. More on that later.
Posted by Katie at 2:17 PM 1 comment:

You know, there was this storm, power outage, beach vacation (that I didn't want to write about prior to the actual event since there has been a veritable rash of break ins in our hood,) and then getting back to life that has hampered my blogging. And it is not going to stop today since a trip to the Opthamologist is in order for Morrigan, much to her dismay. BUT, I had to share "a moment" from last night's swim meet. 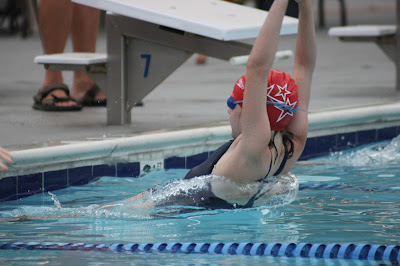 Maggie: I don't know why people cheer so loud. We can't hear them when we're under the water anyway.

Me: To tell you the truth, I never cheer out loud for that very reason. But I am cheering for you in my heart.

Maggie: And when I swim, I hear you cheering in my heart.

Seriously, it is times like that which make it all worth it.

But before my night turns into too much of a Hallmark card, I then proceeded, out of character, to cheer aloud for Maggie's relay, causing her team mate to think it was time for her leg of the event, dive in early and disqualify the whole team. Oops. Back to silence I think.
Posted by Katie at 11:09 AM 1 comment: