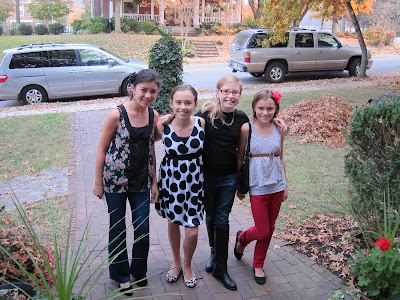 You know when you officially start to feel old? When you drop your daughter and friends off at their first middle school dance. And by drop off, I mean slow the car to a roll and they leap out, making sure there is no chance you may follow, bringing social death with you.

By all accounts, Morrigan had a good time. She was very pleased with the fancy side pony tail we did (with instruction from youtube.) No dancing with boys though because, really Mom, ewww.
Posted by Katie at 9:52 AM No comments:

So it was brought to my attention that I have been noticeably quiet on ye old blog these days. Guilty as charged. Much of it comes from a quiet October. The kids are all doing great. On the most recent round of report cards, there was only one B among them. But "look, aren't my kids great" doesn't make for very interesting posts. I've spent an inordinate amount of time doing yoga, which is keeping me mobile and zen but is also not compelling reading. For all this, I suppose I am glad as it means my life is happy and drama free. But apologies to those who stop by, only to be irritated that I haven't posted again. I'll do what I can to remedy the situation.

All month long I participated in The Independent's voter panel, which I thoroughly enjoyed. Certainly, it made me watch more of the debates than I would have otherwise. By the last one, I don't think there was a single person in the nation that wasn't begging for the torture to end.

After the final debate, the reporter with whom I had been in contact said he was writing an article on ads being run in the swing states and asked if he could call me about the issue. I warned him that I really didn't watch tv much and endeavored to skip all the ads I could but he called anyway and we had a nice chat. He requested I violate my self imposed media blackout and watch a half hour of tv and document the political advertisements. I watched Good Morning America (which reminded me why I don't watch tv in the first place) and he included me in his article.

I did have to take a bit of an issue with the fact that it made it sound as though I watch GMA regularly but I can live with that. It was fun to feel like part of the whole election coverage process.
Posted by Katie at 6:24 AM No comments: 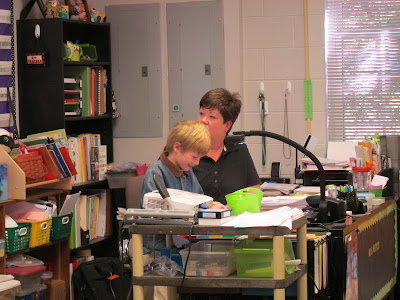 While we didn't have any grandparents here for the Big Day (read: chance to buy books from the book fair for your beloved grandchildren,) Eion was happy enough with me there. His teacher had them fill out and read to the class a worksheet about what they would be like as grandparents. Here's Eion's, typos included.

When I am a grandpa, I will have five grandkids.

They will call me "grandpa."

I will teach my grandkids how to read. [This was a very popular response. He may have chosen it to be expedient.]

I will live in a hous. [One child was planning to live in a pool. Granted, he planned to be a retired lifeguard.]

I will be retired from being a bilder. [Most of his compatriots were planning to be cops. Looks like we will have no shortage of law enforcement in our old age.]

Team McK has been busy in all the most unremarkable and uninteresting ways.

Eion, the medicated type, continues to rock the 1st grade. He will proudly tell you his (behavior ) clip has yet to move to the frown-y face since the introduction of vyvance. His only extra-curricular activities these days seem to be Minecraft related, but he is happy and aspires to grow up and be a real life miner. Or demolitions expert.

Tim and I have been attending tons of yoga classes. After nine months of intermittent pain, I've found that yoga seems capable of making that pain go away. I even had a day during which I did not take any Motrin (first time in I don't know how long.) Not to mention, I am feeling very, very zen.

The only real event of note was a lovely visit from my Dad. The kids happily conscripted him into as many dominoes games as he could tolerate and took him to the local Medieval Festival. 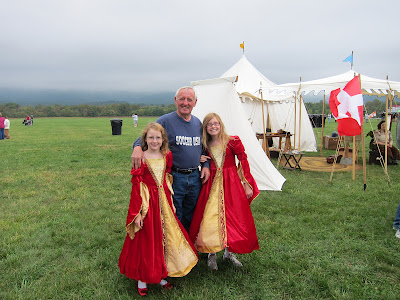 If you dressed up in period gear, you got in free.
You know my family of cheapskates were all over it.

Eion, of the un-medicated variety, was not at all happy about this adventure. But the day was saved when Opa bought him a sword and shield. We're glad E's price is cheap. 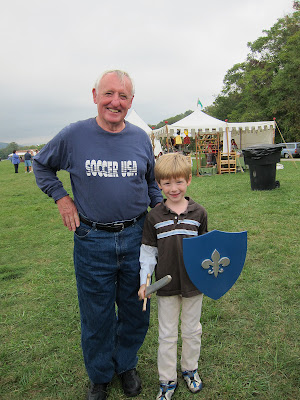 All is well again.

It's pretty boring, yet all together lovely here.

Last night was, as y'all know, the first presidential debate. So I got to react for the voter panel in The Independent! We were limited to about 100 words and not all of mine made it in but it is a start! Actually, it made it fun to watch because I knew had to pick a winner and have some coherent thoughts about the evening. Next up, the VP debate, and really, I can't wait for it.
Posted by Katie at 11:01 AM No comments:

In this season of high election anxiety, when political clashes are all over the darn place, I have made a concerted effort to mostly stay quiet both in person and digitally. C'mon, stop laughing. I MEAN IT. Really, I'll post an occasional comment on someone else's political post on the facebook and I will happily engage with anyone who brings the matter up, but largely reined it in.

That being said, we're going quasi-political today, while largely non-controversial, with the very exciting news of me being part of The Independent's voter panel! What this means is that until the election, I will be asked for my reaction to various political happenings, such as the debates.

This is a dream come true.

I am going to get to run my mouth, about a topic in which I am very interested and it will be published for people to read. Game on.

The first column about the panel is an introduction to the panelists. Click through for my debut!

Not sure if they are running more pictures later. I sent in this: 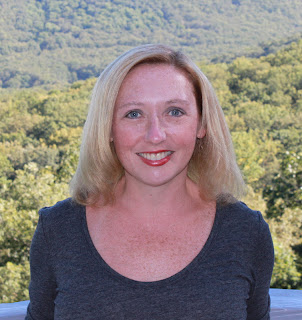 and while I have substantial bias, I think it is way better than the guy's they posted. You know I'll update you when they have new articles from the panel.

As an aside, even though trying not to be to confrontational about politics, I did feel the need to sticker up my ride. I ordered a nice, clear sticker for my back windshield. 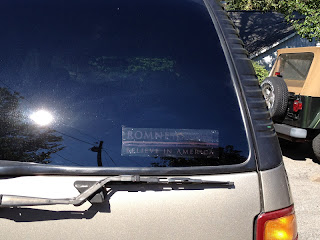 With a snark that is quite biting, Fiona let me know I may indeed be the most stealth Romney supporter ever. Hmmm, so I called up the company from which I ordered the sticker, explained the problem and CafePress.com sent me out a new one, this time with a white background, free of charge. Sadly, I still had some operator error and it ended up visible, but bubbly. 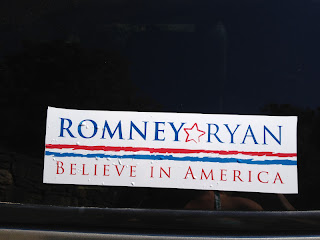 At which point I just gave up and got the magnetic one I should have ordered from the start. Go Romney/Ryan! 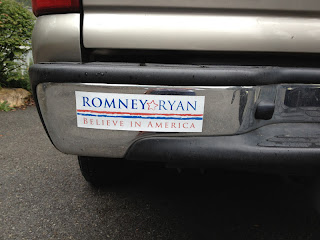