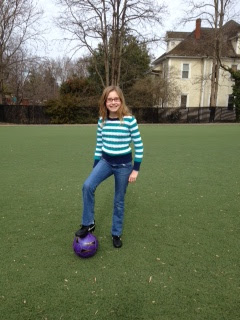 Morrigan, she who we perpetually worry will meld with her bed as she spends so much time there reading, came home the other day and announced she wanted to try out for soccer.

Naturally, we were pleased. (Laziness runs strong with this one.) Pleased enough, giddy even, to go out and purchase the cleats and shin guards needed for tryouts. Seeing as this may be a bust, I have no idea how many girls try out, we did keep an eye on price. In spite of the fact that they were 15% off, I had to say no to the $200, bright pink cleats.

After throwing money at the issue, I next called my personal soccer authority, Dad.

I told him I had a complete novice and two days before tryouts - on what should we concentrate? The good news was that, in addition to his sage advice, this happens to be one of the very few sports about which I have some practical knowledge. I may never have been any good, but I played for four years as a youth.

After several sessions passing the ball to each other, I can say I really hope the pool of applicants is small. She improved even over the last few days but it still a novice. We'll know more this week!

On unrelated Morrigan news, we opened her up a checking account. She was babysitting enough to have more money lying around than I was comfortable with, so we thought it was time. Admittedly, I am more optimistic about the account than the soccer.

It's Cliche, But It IS A Small World After All

After many, many moons of hard use, it came time to get rid of the kids' table and chairs. Two out of three had outgrown it and honestly, I really wanted the open space in my family room. So it was off to Craigslist to sell them. 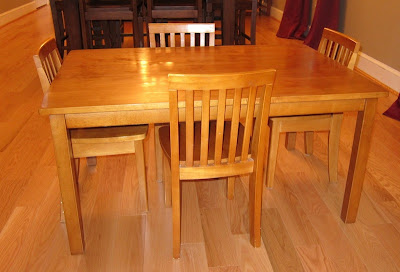 Over and over I got email that had something along the lines of "Hey, you seem interesting! Click through to my site and see my pictures!" or "I'm tired of just emailing - let's hook up!" It was bizarre. May table and chairs is code for something I don't know about in the online world.

So when I received an email that read "Very nice! You still have?" my guard went up. It was another weird spammer, I was sure. But I took a flyer and responded. Over the course of several odd interactions, asking me to hold it for a week or have his brother or father pick it up, we finally settled on a price and a date.

All the weirdos and the strange tone of our interactions had left me a bit spooked. Needless to say, when the final meeting time was while I was home alone, I was planning on being armed for the interaction, just in case.

The guy's brother called and it went down like this:

Me: Let me give you my address. It is 1234 Main Street.
Him: You live on Main Street? We live on Main Street.
Me: Which house?
Him: 1236.
Me: What does it look like? (Our numbers don't really go all in a row so the number alone didn't mean a ton to me.)
Him: They grey one with the stone front.
Me: You mean the Santilli's?
Him: Yes, I'm Don Santilli.
Me: You live next door to me. Why don't you walk on over and we can carry it to your house.

Needless to say, I felt much safer after that.

The Bathroom, She Is Done

Ha! See, it has been so long, I am sure you forgot entirely that I was remodeling a bathroom. It was an odyssey. A five month long odyssey. But on the advice of council (read: Fiona,) I can't talk about why it took so long.

Anyway, enjoy the before and after and be glad it wasn't your house that was in shambles for almost a half year.

Before, behold the 70's glory! 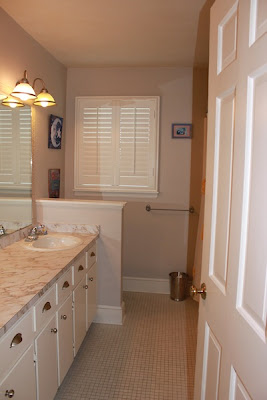 Those wee floor tiles were a bitch to clean. 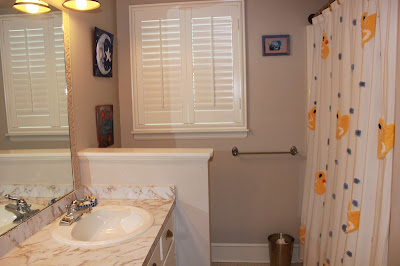 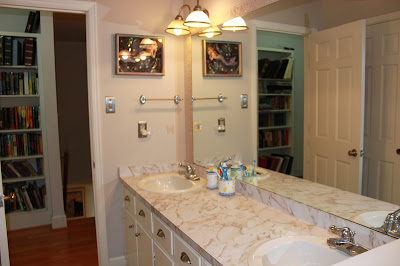 That is real faux gold and white marble! 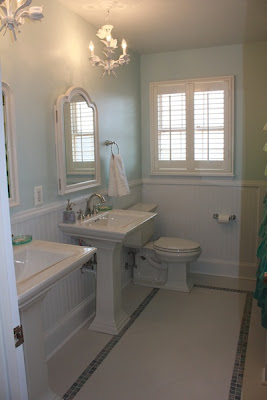 The kids were psyched about the medicine cabinets.
Every house I ever lived in had them but apparently,
my kids had never seen such a thing. 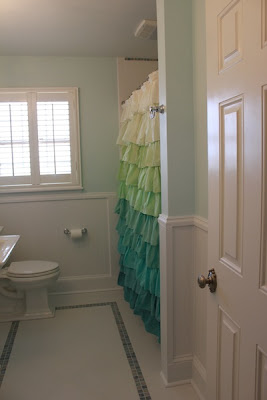 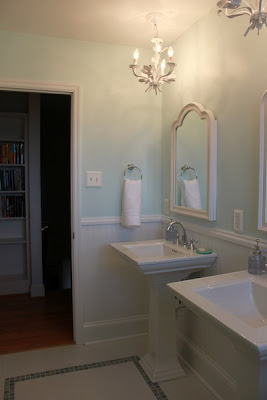 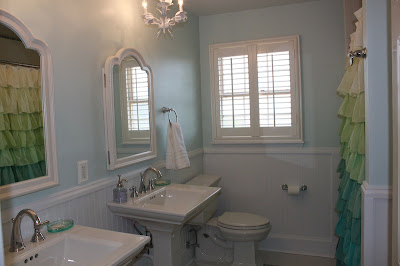 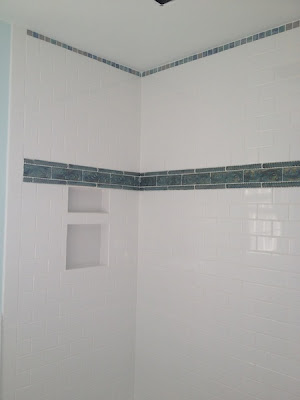 Ah the tales this tile could tell if it could talk
but it is restricted by the same legal binds I am. 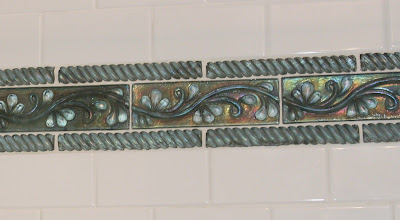 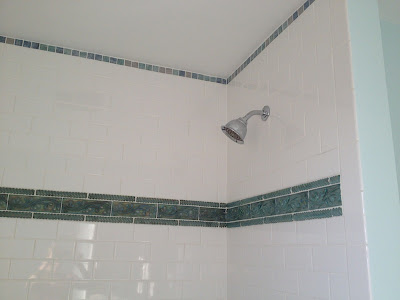 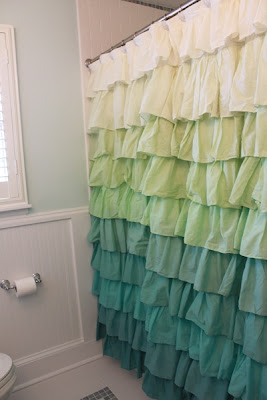 The piece of whimsy for the room, courtesy of Anthropologie. 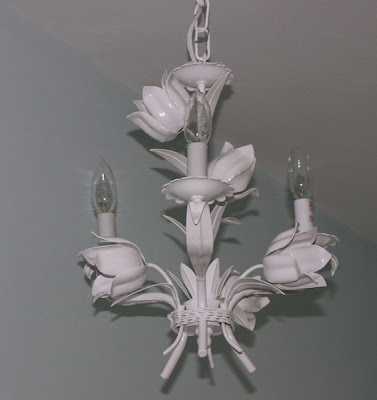 And naturally, a crazy lamp!

At long last, we're done. Once we get an electrician to get the bathroom fan to work.

So if it is a gaggle of geese, a pod of dolphins and a murder of crows, what is is when you are in a large group of middle schoolers? Well for one thing, loud. In a moment of weakness, I volunteered to spend the day with Morrigan's choir as they went to several elementary schools to perform. Somehow, I envisioned driving in my own vehicle. This was not the case. 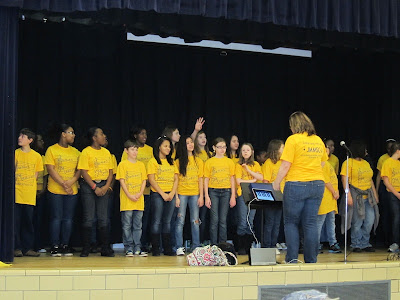 I arrived a few minutes early and was promptly told to print out a nametag. (I really hate those things at school.) My assertion that I would be off campus mattered not a whit. Then I was instructed to wait for the other chaperones. Other? You mean I have to be friendly to new people too?  But my day quickly brightened when I found out Hans was the person on whom I was waiting. Yeah! Not all strangers.

To my surprise, the day went quickly. We did get to ride in the big yellow school bus, something I had not done in years and really didn't miss, but otherwise, it was a great day. We travelled to three elementary schools for performances. The kids were really good (in my utterly biased opinion) and Morrigan and Mark (Hans' son) both had solos when at our home school, Crystal Spring. 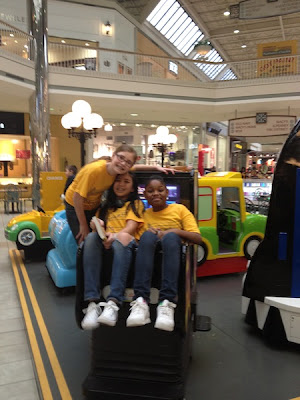 I couldn't have been happier that the entire choir received a huge, warm reception at Crystal Spring. And I survived the multitude of middle schoolers nicely.