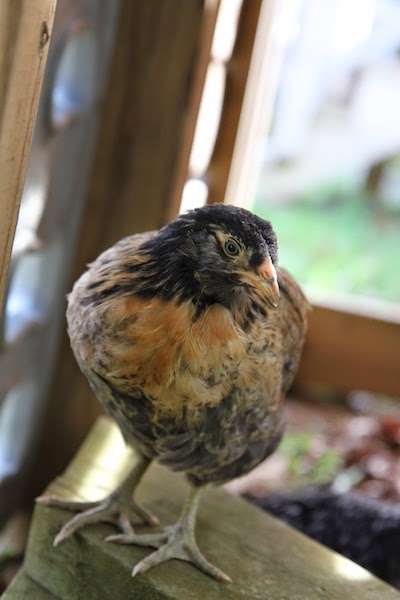 Raising chickens has caused us to learn all about topics previously unconsidered. For example, free range vs. fenced free range. We called our plan for the Peepers "free range," meaning they would be wandering free and not trapped in a coop. But no, we learned, since their roaming area, while generous, was not unlimited, they were "fenced free range." That being said, they seemed quite happy with their accommodations and we felt the academic distinction was somewhat irrelevant.

The Peepers beg to differ.

Ever since The Vanishing, the whole family has been quite obsessively checking on the birds, not that it would really make a difference, we'd just know one was missing sooner. In a check yesterday morning, I found all five chickens gone, as in no where. Panicked, I told Tim they had all been taken. We rushed down to the backyard and searched everywhere. Maybe they got out, Tim suggested. We peeked over into the neighbor's yard where there was a very familiar scratching sound.

Sure enough, all five were happily occupying the yard next door, having gone under the stairs to the driveway and found an exit to freedom. I planned to round them up and return them home to which Tim just laughed and asked if I was going all Rocky Balboa on them. Joke's on you mister. Had you kept your mouth shut, you'd have the vine of the year with me fruitlessly chasing five chickens.

In the end, we decided they would just have to decide to come home, which they did later in the day. At least now we can say that they are strictly free range.
Posted by Katie at 10:17 AM